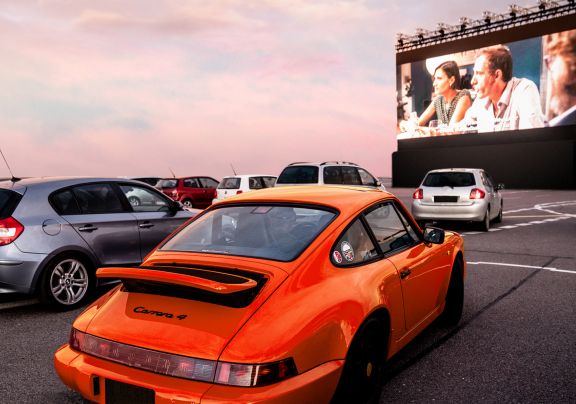 This year’s virtual festival is adding drive-in movie screenings for its physical visitors in Kaunas. The KINO PAVASARIS Drive-In will take place April 2–5 on two movie screens built atop a parking garage.

According to Executive Director of Vilnius IFF Agnesta Filatovė, these drive-ins are a great alternative for events missed by many during the pandemic.

“We are constantly looking for opportunities to organize various and safe experiences for moviegoers in accordance with quarantine restrictions. Last year, we invited them to the airport for Aerocinema. Offers to staycation in hotels with unlimited digital screenings kicked off the current edition and are available until April 5. Towards the end of Vilnius IFF, we’ll start a series of immersive screenings at the drive-in cinema in Kaunas,” says Filatovė.

The lineup will include audience favourites from this year’s festival programme. Fans of romantic films can enjoy Emmanuel Mouret’s subtly humorous “Love Affair(s)”. Viewers will also find the funny and touching Best European Comedy “The Big Hit” from Emmanuel Courcol, about a struggling actor who stages “Waiting for Godot” in prison. The youngest visitors and their families are invited on a colourful journey with “Little Vampire”, which reflects gently on the question of mortality.

Drive-in visitors can also see this year’s opening film “There Is No Evil” by Mohammad Rasoulof. “We are all human, but how human is one allowed to be in Iran? This direct criticism of the regime dives deep into the universal question of how much can one compromise their principles when someone’s life hangs in the balance,” says content creator Dovilė Filmanavičiūtė.

She also highly recommends seeing Jasmila Žbanić’s Oscar-nominated “Quo Vadis, Aida?”, a harrowing retelling of the 1995 Srebrenica Massacre. “This is a heart-rending film. There is nothing more terrifying than being unable to find your child’s grave, and no one crueller than people. A must-see,” assures Filmanavičiūtė.

“The dystopian “New Order” has many similarities with today. It may shock some for its open depictions of violence, forcing to reconsider the implications of any revolution. By contrast, others may find it too obvious and lacking depth. However, polarizing films are the most interesting in contemporary cinema, where dull conventionality has often become the norm,” says Kukta.

According to him, the Polish director of “Never Gonna Snow Again” has a keen eye for modern society’s mentality and emotions. “The director’s newest film follows in the footsteps of her earlier work by beautifully and subtly combining social critique, metaphors, humour and belief in humanity,” shares Kukta.

The drive-in cinema will also include Vilnius IFF’s closing film “Apples”, in which Greek director Christos Nikou examines themes of memory and modern solitude. Finally, those looking to be reminded of cinema’s power of imagination are welcome to see Fanny Liatard and Jérémy Trouilh’s “Gagarine”.