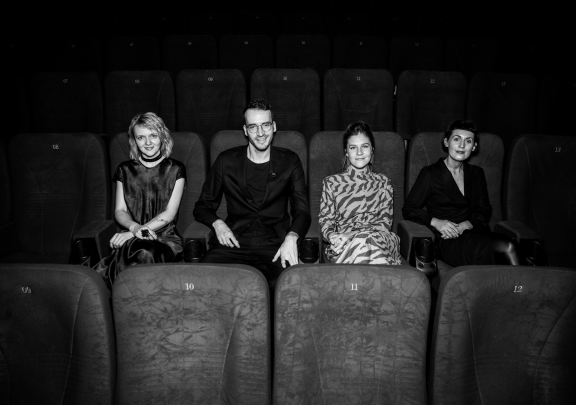 A computer-generated gaming world, a drama examining the intersection of dance and worship, a documentary about extinction. The Discoveries section allows the festival’s four programmers to share their personal favourites, which include 30 feature and 16 short films.

Artistic director Mantė Valiūnaitė chose to highlight Lawrence Lek’s futuristic drama set during the 2065 Olympic eSports final AIDOL. The immersive film touches on themes of creative freedom and reliance on artificial intelligence. Another one of her favourites, Sung-a Yoon’s documentary “Overseas”, follows the dehumanising process of women from the Philippines training to work abroad as maids and nannies. Her third pick – “Bird Talk” – was based on a script that director Xavery Żuławski inherited from his filmmaker father Andrzej. The story examines a crisis faced by Polish intellectuals and the fight against the system waged by their younger counterparts.

Programmer Aistė Račaitytė was captivated by the explorations of faith in “Disco”. Norwegian writer-director Jorunn Myklebust Syversen created an existential drama full of contrasts, as a teenage Christian evangelist and reigning champion of the title dance genre searches for a sense of community. Račaitytė goes on to name Ana García Blaya’s “The Good Intensions”, which portrays the relationship between a well-meaning but irresponsible father and his kids, as one of the most feel-good movies in the entire programme. Finally, Théo Court’s “White on White” is the devastating historical drama about the genocide of Chile’s indigenous people, told through the eyes of a photographer hired to take pictures of a coloniser’s distressingly young bride.

Dovilė Raustytė-Mateikė found an engaging analysis of societal passivity at the centre of Maria Clara Escobar’s “Desterro”, which follows a woman who retreats from her family life. Former journalist Juris Kursietis deftly examines the subject of modern slavery in “Oleg”, as a Latvian migrant worker finds himself in increasingly abusive circumstances. The programmer’s third highlight is Floor van der Meulen’s documentary “The Last Male on Earth”, which criticises humanity’s megalomania as tourists hurry to catch a glimpse of a rare white rhinoceros during his final days.

Programmer Gediminas Kukta selected Beniamino Barrese’s intimate documentary “The Disappearance of My Mother”, about a former supermodel who wants to reclaim her identity by vanishing from public life. His next discovery was Fernanda Valadez’s Sundance-winning “Identifying Features”, a compelling look into the life-threatening journeys taken by US-bound illegal immigrants. Filippo Meneghetti’s moving “Two of Us” left an indelible impression for its restrained depiction of a decades-long love affair between two women. Finally, short film “A Demonstration” by Sasha Litvintseva and Beny Wagner reveals how humanity perceives the natural world and what we interpret as monstrous.

The 2020 Vilnius IFF programme can be found here: https://kinopavasaris.lt/en/programa