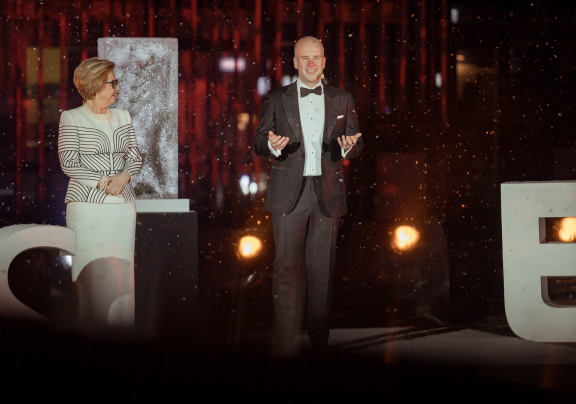 The pandemic has changed many things over the past year, but the springtime start of Vilnius IFF isn’t one of them. The festival has embraced streaming to ensure a continued celebration of cinema for filmmakers and viewers alike. This year’s event will run March 18 through April 5, asking the fitting question “To Act or/and To Be?”.

Mohammad Rasoulof’s opening film “There Is No Evil” marked the start of the virtual event. The Berlin Golden Bear winner from Iran examines themes of moral strength and the death penalty.

Vilnius lit up in bright orange – the colour of this year’s festival – to commemorate its start. The opening ceremony was broadcast live from Hotel PACAI. In his speech, the mayor of Vilnius Remigijus Šimašius emphasized the creativity of the organizers. “Last year, when festivals around Europe were halted, Vilnius held theirs. The pandemic hasn’t gone away, but Kino Pavasaris looked for and found new forms by inviting movies to the city’s hotel rooms, showing once more what’s possible when the festival, the city, and hotels band together. I am certain that the festival has established itself as one of the most creative in Europe. And that provides great momentum for the decades to come.”

After being one of the first international festivals to switch to a digital format last year, organizers had prepared five strategies for 2021. “Since there was much uncertainty surrounding this year’s edition, the team wanted to develop a format that would combine virtual and in-person experiences,” said Agnesta Filatovė, Executive Director of Vilnius IFF.

An online programme is available on the festival’s brand-new virtual cinema platform, while residents of Vilnius and Kaunas will be able to check-in to hotels for short vacations with unlimited digital screenings. Festival CEO Algirdas Ramaška assured fans that some films will also be presented at a physical festival. “We’re saving a part of the programme for reopened movie theatres that we miss dearly,” shared Ramaška, promising an impressive and unforgettable film slate.

The programme remains geographically and thematically diverse, hoping to break the monotony of quarantine with new ideas and emotions. “By asking viewers whether they should act and/or be, we encourage discussions on motives behind personal and communal behaviour, about freedom and responsibility, connections between past and present,” said Mantė Valiūnaitė, Artistic Director of the festival.