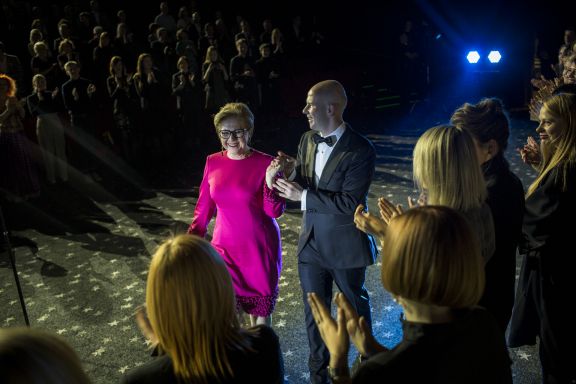 More than 600 attendees illuminated the opening ceremony of VIFF in solidarity with the director Kirill Serebrennikov, who at that time was under house arrest in Moscow amid unfounded accusations. The photo, symbolizing support for artistic freedom, spread across social and news media.

Right after the festival has ended, renowned Russian director was freed from the house arrest under the written promise not to leave Moscow. This will make it easier for Serebrennikov to continue his work as theatre and film director and communicate with others.

“It might be just a coincidence, however, our goals to contribute to ongoing changes in the world by screening certain films and doing bold actions have been met. We continue to support the director, whose film “Summer” also opened the festival, and artistic freedom”, - comments Algirdas Ramaška – the executive director of VIFF.

Reacting to the changes in the world

Since 2005 the attendance of the festival grew steadily from 1 000 to 2 500. This year the growth exceeded all the expectations, in 2019 festival has been attended by more than 10 thousand festival-goers.

During two weeks there were more than 1 300 screenings in 19 cities that have been attended by 126 542 quality cinema lovers. The festival also welcomed 1 535 guests from over 30 different countries.

The festival programme coordinator Mantė Viliūnaitė says that each year she notices the growth of both the number and the consciousness of the VIFF attendees. According to her, it is delightful to see many people interested in films that scrutinize core questions and themes. “This inspires us to keep on scouting for strongest and most relevant films for the next edition”, - says Mantė.

As many other film festivals around the world VIFF also reacts to ongoing changes in the industry. Hence, this year the renewed team of programmers paid greater attention to films made by female directors. Out of 170 selected films, 34 per cent were made by women directors. Next year the goal is to increase this number.

According to Algirdas Ramaška, the attendees are always taken into consideration during the preparation and development of the VIFF. Every year, the festival organizers are looking for ways to reduce geographical, financial or other disjuncture of the festival goers.

During the 24th edition, VIFF expanded its territory to 19 cities across Lithuania, uploaded some of the selected films to online home cinema platforms, voiced films and reduced prices for seniors as well as organized special screenings for visually and hearing impaired.

Screen 9 was opened for those seeking alternative experiences and enjoying non-conventional films. Next year the repertoire of this hall is expected to be enriched with even more experimental content.

In cooperation with the company "Meno avilys" which implements international film education project "Moving Cinema" in Lithuania, a new program "Young Programmers Choice" was introduced. Eight 17 – 19-year-olds tried out film programmers roles and selected features that to them seemed as the most relevant for their peers.

European debut competition traditionally introduced emerging directors from Europe who are using original forms to talk about the ongoing changes in the society and the way they view it.

In order to broaden the audience's experience, film-inspired discussions with filmmakers and experts in specific fields were organized.

Relevance to the international film industry

This year, for the first time in the festival history, so many Lithuanian films premiered at the VIFF. In total, 5 feature and 10 shorts films were screened. Majority of which participated in the international competition, assessed by a competent jury.

"We want the festival to become a starting point for talented Lithuanian filmmakers from where they would have opportunities to screen their films not only in national but also in international cinemas and festivals” – says Mantė Valiūnaitė.

As a tradition, during the last days of the festival, an audiovisual industry event “Meeting Point – Vilnius” took place. The event was attended by several hundred filmmakers, distributors, sales agents, media representatives and other industry professionals from all over the world. Within three days, they participated in a wide range of discussions, lectures, training sessions, private sessions as well as special Coming Soon and Industry screening sessions.

According to the head of the MPV Alessandra Pastore, the event is becoming a platform for young, debuting talents to present their work and for established industry professionals to calmly meet in-between Berlin and Cannes film festivals, as well discover new talents.

The team of VIFF has already begun preparing for the 25th edition of the festival.