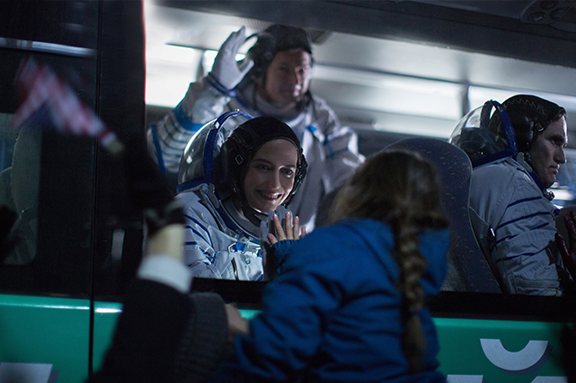 The 2020 edition of Vilnius IFF Kino Pavasaris looks to the future with its programme and visuals, created by renowned artist duo Pakui Hardware.

Opening the largest film festival in Lithuania will be French writer-director Alice Winocour’s “Proxima”. It stars Eva Green as an astronaut preparing for a mission to Mars as she struggles with leaving her young daughter behind. While the film’s setting may seem extraordinary, the reality of a parent torn between work and domestic obligations provides a relatable emotional through line.

“This film reflects the inclination of contemporary cinema to reassess the changes in familial structures as determined by the rapidly changing world and technological advances. Cinema increasingly examines a future that’s only a few years or decades away, as catastrophic effects of climate change predicted by scientists have come to materialize,” commented the festival’s artistic director Mantė Valiūnaitė. Vilnius IFF marks its 25th anniversary by reflecting on futures imagined in movies and beyond. This year’s visual identity is based on the work of Lithuanian artist duo Neringa Černiauskaitė and Ugnius Gelguda, who go by the name Pakui Hardware. They have held solo exhibitions in New York, London, Berlin, and Mexico City, as well as taken part in group shows at the Musée d’Orsay in Paris, MAXXI Museum in Rome, Kunsthalle Basel, and the Istanbul Biennial. This year’s visuals invite audiences to come up with their own interpretations for what’s depicted, be they hopeful, melancholy or something in between. These numerous scenarios will be explored in the festival’s future-focused programme starting March 19th.