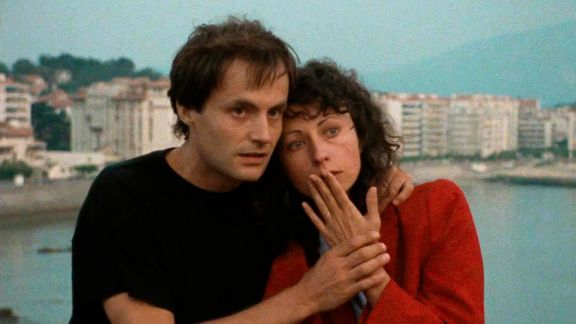 Programmers Present Theme Section, Asking “To Act or/and To Be?”

The question that has been on many minds – whether to act, to be or both – will take centre stage at the online edition of Vilnius IFF, March 18 – April 5. This year, the theme section will replace the retrospective to showcase admired films from the past.

What genres, directors and settings can viewers expect from the “To Act or/and To Be?” section, and which contemporary films relate to this theme? Festival programmers Mantė Valiūnaitė, Aistė Račaitytė and Andrei Tănăsescu give us the lowdown.

How would you describe the theme of the festival and the relating section?

Mantė: I started developing the theme in my mind after watching Kelly Reichardt’s “Night Moves” and Todd Haynes’s “Safe” during the first shutdown. The dialogue between the two seemed incredibly relevant today. After sharing my thoughts with the team, we formulated the question “To Act or/and To Be?”. It’s the query that aids in rethinking our actions and choices as individuals and a community. We wanted the theme section to look back and discover this question within different contexts, often arising when radical changes in one’s surroundings lead to old behavioural models becoming inadequate.

Aistė: To me, the theme of the festival begins with the existential question of whether to live at all when faced with various injustices, awaiting grim forecasts, and approaching death. Choosing life means encountering situations where we must decide between an active and a passive existence. It’s an extremely broad question, covering everything from the persistent rebellion against life’s absurdities of the eternally boulder-rolling Sisyphus, to specific activism that fights political systems, social injustice, or human indifference to climate change.

Andrei: I consider “To Act or/and To Be?” an extremely relevant proposition for a festival. It’s an important gesture of confronting its audience with essential questions that pertain to day-to-day life but have ramifications to society at large and expanding further out. It lies at the core of the dialogue between cinema and audiences: our passive or (re)active participation at the ideas, situations or emotions shown. The friction created within each of us as spectators is an important, necessary process through which we consciously analyse our position and relationship to the world around us.

Which one of the films from the theme section would you recommend?

Aistė: “Streetwise”, directed by Martin Bell in 1984. On the one hand, life on the streets is a fierce everyday fight for survival, a rebellion against cruel circumstances or a system that has rejected the individual. But the decision also signals a resolve to stop spending every moment trying to be someone, prove something, please others, and just swim downstream, live in the present as if tomorrow didn’t exist. Is the world entirely accommodating to those who decide to be, not to act?

Mantė: In Éric Rohmer’s 1986 film “The Green Ray”, the simple story of Delphine feeling pressure from her milieu and herself to have the best vacation and forget her ex-boyfriend becomes a metaphor for living authentically. Or rather accepting yourself as you are, and all the freedom that brings. When Delphine recognises that all the advice from her friends on how to have a good time doesn’t suit her, she can finally admit to herself what she truly desires.

Andrei: Shirley Clarke’s “Portrait of Jason” embodies the slippery threshold of authenticity vs. performance both within its formal structure as a pioneering work of cinéma vérité, but also through its main subject Jason Holliday. As the film progresses elliptically through the 12-hour session, we are confronted with Holliday’s tall-tales of his extravagant lifestyle, revealing the existential necessity of performance for a gay, African American man in 1960s America.

Which contemporary festival films relate to this year’s theme?

Aistė: What’s most interesting is that the question of acting and/or being that arose from current uncertainty became a compelling device for reading films. It reveals true-to-life wisdom when posed to different works, revealing new interpretations in many films through its prism. I would highlight “Quo Vadis, Aida?” by Jasmila Žbanić, “The Death of Cinema and My Father Too” by Dani Rosenberg, and “The Dog Who Wouldn’t Be Quiet” by Ana Katz among others. Not to mention the many documentary subjects who encounter this uncertainty at every step.

Andrei: “Natural Light” by Dénes Nagy, a wartime crisis of consciousness constructed with precise psychological nuance, and “Twilight’s Kiss” by Ray Yeung, an existential dilemma of delicate beauty that weighs true happiness and self-fulfillment against personal responsibility toward one’s family and society’s expectations.

Mantė: The theme is also aptly represented in “Goodbye Mister Wong” by Kiyé Simon Luang, in which the choices of the main character symbolize the internal resistance of Laos to Chinese influence. Her decision to take open action and tell mister Wong uncomfortable truths while withstanding his pressure arises from her internal strength, belief in her values and ethics. The love story in this film becomes a political message. I’d also mention “Night of the Kings” by Philippe Lacôte, wherein external factors force the main character to recount stories until dawn to save his life. His performative action becomes the question of life or death, he is compelled to act to continue being.

The theme section includes 11 films, 5 of which will be available for streaming, while the rest will be screened when movie theatres reopen.

The online theme section also includes Lucian Pintilie’s 1968 classic “Reenactment”, regarded as the best Romanian film of all time, fiercely criticizing the corruptive nature of power. It will be joined by Rosa von Praunheim’s provocative look at the lives of gay men in 1970s Germany “It Is Not the Homosexual Who Is Perverse, But the Society in Which He Lives”.

For those missing the in-person festival experience, Vilnius IFF has prepared audiovisual installations. Built in the outdoor spaces of the city’s contemporary art museum, they will represent the themes of the previous and current editions. The installations were created by interdisciplinary teams of artists, combining thematic visuals with specially composed music.