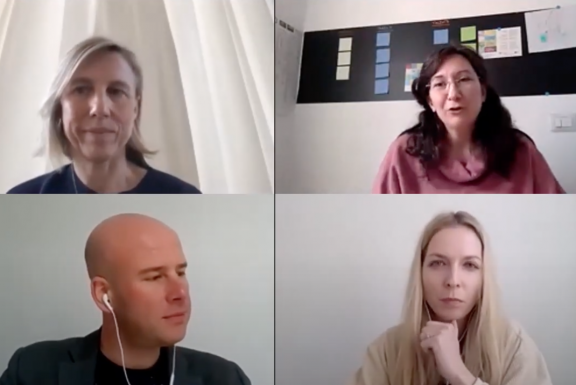 As the pandemic rages on, Meeting Point – Vilnius, international audiovisual industry event of the Vilnius International Film Festival Kino Pavasaris, cancelled due to coronavirus yet vowing to return next year, decided to address some of the challenges film festivals need to face nowadays – along with Creative Europe Desk Lithuania, CPH:DOX, Developing Your Film Festival and European Film Forum. Diving into the current reality of events forced to cancel their upcoming editions or, like in the case of Vilnius and CPH:DOX, move online. “All this will pass, sooner or later, but the audiovisual industry will probably change forever, at least partially. We think it’s already time to start rethinking our usual professional life and our approach to the industry” – said Alessandra Pastore, Head of Industry at the Meeting Point – Vilnius when opening the online conference named The Challenge of Realising a Digital Festival During the Coronavirus Pandemic: Experiences and an Exchange of Best Practices, held on April 9 and “attended” by over 500 people. “This number is a demonstration that we all need to share our experiences and try to find the common ground.”

Lucia Recalde (Head of Unit, Audiovisual Industry and Media Support Programmes at European Commission) seemed to agree: “I acknowledge the very difficult moments we are all going through. But at the same time, we see the speed at which this community is coping and adapting to change, which is pretty reassuring” – she said. “This situation is really dramatic for the whole audiovisual sector: film productions have come to a stop, production companies are telling us that they have lost half of their turnover. Cinemas and festivals are among the ones most severely hit by the crisis. It was very clear that we need to be flexible, providing the response within the limits that we have to help you cope” – she observed, while noting the decision to extend some deadlines for the submissions of the applications for the on-going calls or reshuffling the budgets in order to cater to the cost of IT development and online activities. “We need a coordinated response from the whole community, because these challenges are really unprecedented.”

Algirdas Ramaska, CEO of Vilnius International Film Festival Kino Pavasaris, was the first to share his experience. “Together with CPH:DOX, we were first on the frontlines, making the decision not to give up and to fight for our audience and the filmmakers. We were preparing our anniversary 25th edition for over a year, but everything changed dramatically. It was heartbreaking to cancel the Meeting Point industry event, as we didn’t have the resources to move it online, but we still believed we could save the festival” – he said, recalling the moment when the decision was made. “On March 12 I received a call from the mayor of Vilnius, telling me there was no way for the festival to happen this year. I said that we made a promise to our audience, promising they were going to see the films they were waiting for. Luckily, he offered his full support.” In the end, 69% of the programme was shown online on five local streaming platforms, culminating with 56.000 paid views. Saving 41% of ticket revenues, 50% of sponsorship deals and 94% of public funding in the process.

Despite various hardships, from having to prepare the films for different platforms, dealing with technical issues or coming up with new marketing strategies, Ramaska noted the support from the media and the audience, which also received 1.000 gift boxes from the festival. “We sent the invitations for the opening ceremony, asking people to dress up and celebrate it at home, posting photos online” – he said about the initiative that went viral. “We also streamed the award ceremony live from the cinema when it was originally supposed to take place, which was revealed at the end, with the closing film screened in empty cinemas all over the country as an act of support. Nothing will ever replace the experience of watching films on the big screen, never” – he said, while also thanking his team. “Einstein said that there are two types of people in the world: those who believe that nothing is a miracle and those who believe that everything is a miracle. I would add one more type: those who create miracles. That’s the Vilnius Film Festival dream team.”

Sofie Bjerregaard, Head of Communication at CPH:DOX, which had only six days to go digital, added: “I am sure that all the festivals that went through this will never be the same again. CPH:DOX certainly won’t. For us, it wasn’t an option to cancel, so everybody worked around the clock.” The festival managed to keep 75% of the whole programme, 20 live debated and talks, as well as such industry activities like 895 one-on-one meetings and conferences, with pre-recorded pitches made available to all the decision makers. “What was crucial was that we got to keep our six competition sections, with juries watching films online. We received massive support from journalists too, both local and international, delivering 2.000 articles. That was really amazing to see” – she said, while sharing more numbers including 65.000 streams and 8.000 viewers participating in the online debates and talks. “We cut the loss we could have had by 70% just by going digital, so of course it was crucial to make this decision.”

Danish festival decided to team up with existing platforms, as there was no time to develop their own: Festival Scope and New Zealand-based SHIFT72. “What we thought would be the biggest challenge, securing our programme right after we decided to go online, turned out to be the least of our worries” – she said. “We decided to treat all films as if they were screening in a virtual cinema, so they had a limited capacity of 1.000 viewings.” There was also a need to reshape some of the existing departments, as there was a huge need for customer service. “We had these “hotline heroes”, as we called them. One didn’t talk to his girlfriend for three days because he was so busy answering calls! There was a potential to reach a bigger audience as we are a Copenhagen-based event and now we could go national, but out social media campaign needed to be more explanatory. That being said, people were engaging with our content in the way we haven’t quite seen before.” Including such celebrities as Trine Dyrholm and Pilou Asbæk.

As the conference came to an end with a Q&A moderated by David Sin, Head of Cinemas at Independent Cinema Office, with Irina Sofletea, Policy Officer at European Commission joining in as well, Algirdas Ramaska and Sofie Bjerregaard came to a similar conclusion: despite some interesting developments and creative solutions, online festivals are hopefully not here to stay. “When we announced we were going online, we had no idea if we would succeed. It’s not ideal to turn your festival into a digital event in six days, but I think we would have done very few things differently, even with more time to prepare” – said Bjerregaard. “This kind of situation makes us all appreciate this social, physical space even more. It was the only alternative, but online festivals cannot replace the experience of going to the cinema.” “We are just waiting to go back to normal” – agreed Ramaska. “To go back to the cinema, to see the audience and to be with them. There was no other option, but nothing will change dramatically [after the COVID-19 pandemic] and we will be the first to come back to the cinema. It’s a promise.”

You can find the recording of the conference here: