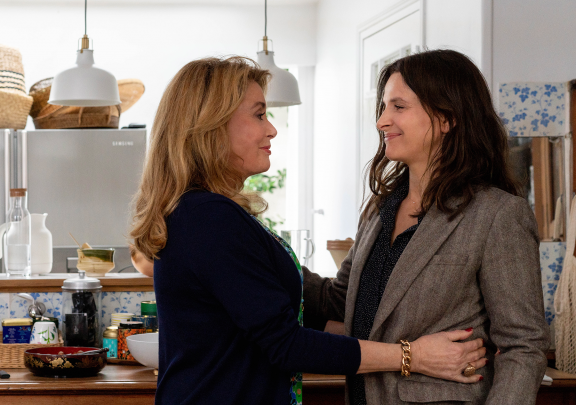 Vilnius IFF is set to celebrate its 25th anniversary with 21 works from renowned auteurs, including Bong Joon-ho, Patricio Guzmán, Jim Jarmusch and more. The Masters section is sponsored by “Pergalė” chocolate.

Kore-eda continues to explore familial ties with “The Truth”, also a prominent theme in his phenomenal “Shoplifters” – one of the most popular films at last year’s Vilnius IFF. Catherine Deneuve and Juliette Binoche star as a mother and daughter at odds in the Japanese director’s first foray outside of his native country.

The insightful drama comes at a major turning point in Kore-eda’s career but is nonetheless a masterful display of his skill. Commercial Director of “Pergalė” Jurga Sakalauskaitė relates to the director’s journey. “One of our major goals is to create original flavours using professional expertise,” she says.

Patricio Guzmán completes his trilogy about Chile with “The Cordillera of Dreams”, winner of the Best Documentary award at Cannes. Set in the mountains that separate Chile from the rest of the world, the film examines human cruelty under Pinochet’s repressive government.

In “So Long, My Son”, Wang Xiaoshuai creates an epic drama about China’s recent history told through the personal lives of two couples. The leads received Best Actor and Actress awards at Berlinale for their portrayal of people adjusting to the complicated changes that took place since the 1980s.

Another work about families affected by circumstances beyond their control comes from documentary filmmaker Thomas Heise. “Heimat is a Space in Time” covers the last 100 years of German history using the director’s personal archive of letters, diaries and other documents.

Jim Jarmusch foresees the fate that may befall our consumer society in his star-studded zombie horror comedy “The Dead Don’t Die”. Lav Diaz envisions a dystopian future for the Philippines in sci-fi drama “The Halt”, set in 2034 but eerily reminiscent of his native country today. Meanwhile, the near future set “Bacurau”, directed by Kleber Mendonça Filho and Juliano Dornelles, combines elements of Western, horror and sci-fi to expose tensions in Brazil’s current political climate.

Palme d’Or winner Ken Loach returns to present-day with a bleak look at economic inequality with “Sorry We Missed You”. As a family tries to overcome their financial problems, they end up feeling the severe effects of labour exploitation.

The Dardenne brothers investigate the radicalization of Muslim youth in “Young Ahmed”, which follows a biracial Belgian teenager who develops a connection with an extremist imam.

The Masters section also includes the previously announced “Parasite”, which will have a special screening at the Lithuanian National Opera and Ballet Theatre. Bong Joon-ho’s film has scored numerous accolades, including 4 Oscars and the Palme d’Or.

The complex, romantic and explicit “Devil Between the Legs”, directed by Arturo Ripstein and written by his wife Paz Alicia Garciadiego, explores the sexuality of a senior couple and their lasting relationship as their bodies deteriorate.

Russian director Andrei Konchalovsky was inspired to create “Sin” by his love for Italian culture. The nontraditional biopic depicts the life of renowned 16th century sculptor and painter Michelangelo as he struggles to finish the frescoes of the Sistine Chapel.

Bruno Dumont calls his newest offering “Joan of Arc” “a gothic action film”, which sees the heroine face her trial and execution in semi-musical fashion.

Also included in the Masters section are filmmaker Helena Třeštíková and Jakub Hejna’s “Forman vs. Forman”, a comprehensive documentary about the Oscar-winning Czech director, Claude Lelouch’s romantic sequel to “A Man and a Woman”, “The Best Years of a Life”, and Corneliu Porumboiu’s film noir comedy “The Whistlers”. There will also be short films from Yorgos Lanthimos with “Nimic”, Ben Rivers with “Look Then Below”, and Clemens von Wedemeyer with “Transformation Scenario”.

The entire 2020 Vilnius IFF programme can be found here.