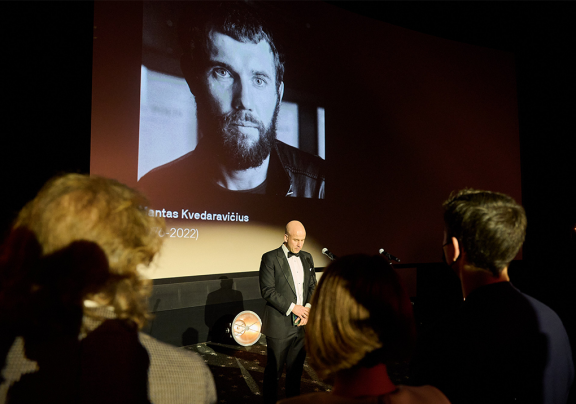 Sometimes life writes such a script that the screen gets dark and the audience is left with silence and sadness. This, and the emptied hearts of the people in the film industry, became a symbol of the tragic death of Mantas Kvedaravičius - the Lithuanian filmmaker who was killed yesterday near Mariupol. He was honored during the Vilnius International Film Festival awards ceremony.

“We lost a director who did a heroic job documenting the brutality of war. It’s hard to find words at this moment. Mantas himself was not a big talker. Therefore, I invite everyone to observe the minute of silence in honor of the deceased and the people who were killed fighting for the freedom of Ukraine”, said Algirdas Ramaška, the CEO of the festival, at the beginning of the evening.

He noted that on the opening day of Vilnius International Film Festival - the Ukrainian Day - when Kvedaravičius’ Mariupolis was screened, no one could have thought that this same film would be repeated, under such tragic circumstances, on the last day of the festival. “Mantas dedicated his work to the areas of conflict, the reality of war and the humanity that shines in that darkness. His cinema was and will be extremely important beyond today,” said Ramaška.

The festival, which is ending against this background of painful loss, has traditionally dedicated the final evening to the competition programme awards and daring European filmmakers who do not shy away from uncomfortable topics, as judged by the international jury.

Winners of the European Debut Competition

Marina Redžepović from Croatia, who starred in Sonja Tarokić's The Staffroom, was named the Best Actress. “Her role helps us breathe and reflect in a society where there is almost no room for that,” Fiorentino said at the award ceremony.

The Best Actor award was presented to Giedrius Kiela for his role in Laurynas Bareiša’s The Pilgrims. According to Fiorentino, who presented the award, the actor was appreciated for his ability to reveal different emotions, keeping the viewer in a state of uncertainty and at the same time revealing a complex tone.

The creative duo Helena Girón and Samuel M. Delgado were named as the best directors of the competition for their impressive film They Carry Death. According to Marzano, the jury presented the prize for a film that uses a skillful cinematic language to explore historical darkness and takes the viewer on an epic, mysterious journey that frighteningly connects the past with the present.

Serbian director Mark Grba Singh’s Rampart has been awarded as the best debut film of the festival. According to the jury, this film, whose main structural material consists of family archival footage, puts forward some sensitive issues, the most important of which is change, and the lack of it.

Winners of the Short Competition

35 films from across Europe competed in the Short Competition. The international jury consisting of Jutta Wille, project coordinator of the German Short Film Association, Laurence Boyce, program director of the PÖFF Shorts section in the Black Nights Film Festival, and director, animator and illustrator Skirmanta Jakaitė, selected the best ones.

Impossible Figures and Other Stories I by Polish director Marta Pajek was named the winner of the competition. Jutta Wille, who presented the award, noted that the film reminds us of the fragility of our existence and how easily everything can be lost forever, even if the story seems doomed to repeat itself.

Special mention goes to Swiss director Jela Hasler for her short film On Solid Ground, which reflects on those intense, shocking moments when the pressures of contemporary life become unbearable.

The Favorites of Viewers and Critics

Like every year, Vilnius International Film Festival films have been rated not only by the film industry professionals but also by cinemagoers. After summarizing their voices, the festival’s most acclaimed feature film became Joachim Trier’s The Worst Person In The World.

The best film in the Baltic region has also been announced by the International Federation of Film Critics (FIPRESCI), which unites film critics from more than 60 countries around the world. In this Vilnius International Film Festival, the FIPRESCI jury - film critics Mitchievici Angelo Nicolae, Daniel Oliveir and Bernard Besserglik - awarded the prize to Hungarian theater and film director Kornél Mundruczó for his Evolution.

Starting with April 4, the most loved films of the festival will be available in cinemas in Vilnius, Kaunas, Klaipėda, Šiauliai, Panevėžys, Marijampolė and Gargždai.

This year, viewers in cinemas and in front of their home screens throughout Lithuania had the opportunity to see 90 feature films and 51 short films from 56 different countries. Four films - the opening film First Cow, the most loved films The Worst Man in the World and The Good Boss and Laurynas Bareiša’s feature debut Pilgrims - were also accessible to the hearing impaired. Pilgrims was also accessible to the visually impaired.

The festival would not be possible without the many partners that support Vilnius International Film Festival - the patron of the festival Vilnius City Municipality, the Lithuanian Council for Culture and the European Union program Creative Europe MEDIA, as well as the Lithuanian Film Center, which strongly supports cinema distribution in Lithuania.