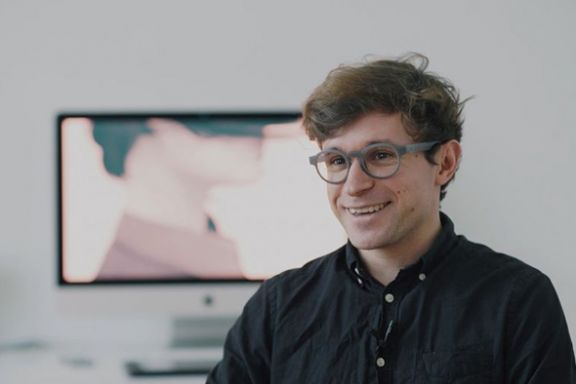 New Winds has been chosen to be this year’s festival slogan. The 22nd Kino Pavasaris, taking place March 23rd – April 6th, will premiere many works from new directors as well as Lithuanian films.

Strautniekas, a 28-year-old illustrator who grew up and is based in Vilnius, is well-known for his retro futuristic aesthetic that plays with shading and uses subtle colours.

Strautniekas’s clients include Forbes Japan and GQ France, his works have been featured in The New York Times, Wired and many other publications. His illustrations have also been used by such clients as Mini Cooper, Adobe and Facebook.

Strautniekas’s works have been purchased by hundreds of people as limited edition prints. A 100 copies of his illustration New Winds have also been printed in large scale specially for the festival, and are already available online at shop.kinopavasaris.lt. For any details, please contact us: shop@kinopavasaris.lt

Every year, VIFF invites various Lithuanian artists to create the festival’s visual identity. Last year, creative studio Pet Punk and their art director Gediminas Šiaulys made a blooming cinema chair that was displayed during the festival opening ceremony at the Lithuanian National Philharmonic.

“I like that Kino Pavasaris gives artists the freedom to interpret the festival. New Winds is my personal interpretation for this year. I wanted to express both the fresh sensations that cinema gives us, and the drama of it. I hope festivalgoers like my work,” said Strautniekas.