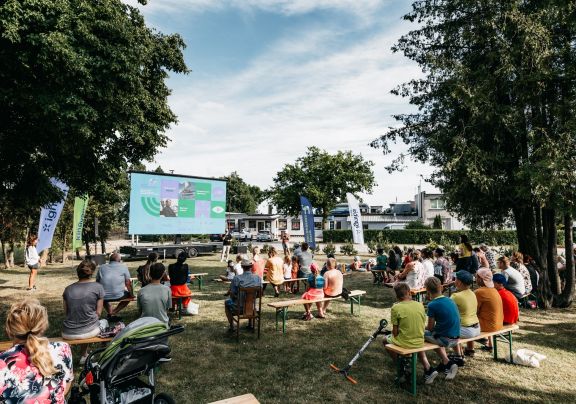 Film Caravan is half-way through its expedition: in two months it will visit as many as 40 Lithuanian cities and towns

Summer means only one thing for film lovers - outdoor film screening season. The project Film Caravan is halfway through its 8th journey across Lithuania and is rolling in all directions of the compass - free film screenings under the open sky are taking place from Šilutė to Švenčionys, from Ukmergė to Marcinkonys - in total 40 unexpected locations. For the full route and screening times please check kinokaravanas.lt.

Through the long years of the project’s existence thousands of people have fallen in love with quality films. The team of the project rejoice with the increasing invitations to come to the most distant corners of Lithuania, and the local communities’ involvement in the organisation of the outdoor screenings.

This year Film Caravan will visit locations where nothing similar has ever taken place or has happened extremely rarely: the film expedition will go to Lazdijai, Rietavas, Pabaiskas, Semeliškės, Jurbarkas, Šalčininkai, Skuodas, Širvintos and many other places.

This summer Film Caravan will surprise the audiences with the new LED screen, which means not just wonderful video quality, but also an opportunity to screen films during the day. More screening times and films await the audiences, amongst them films for the whole family. In each area a one-day cinema will open up, which will screen a few films, totalling more than 100 screenings across Lithuania. This digital LED screen is the only such screen amongst the travelling film projects in Lithuania.

One more novelty of the 8th season of the Film Caravan - additional events that accompany the screenings and expand the whole experience. Prior to many screenings film presentations will take place, audiences will be able to partake in discussions touching on the most relevant subjects, educational activities and meetings with filmmakers.

I am Greta  is part of the film repertoire of the Film Caravan, a film about a student from Sweden - Greta Thunberg, who began a strike for climate change and in a few months gathered a following of a few hundred thousand around the world. After the screening, all will be invited to discuss ecology and each of our contribution and consciousness with the project partners.

The project travelling across Lithuania will also pay a great deal of attention to mental health and inner conditions of humans. In the forthcoming events of the Film Caravan the debut film of Lithuanian director Tomas Smulkis, presented this year and positively reviewed by the critics, People We Know are Confused will be screened. It invites the audiences to sincerely look at our cities and people living in them. After the screening “Jaunimo linija” (En. Youth Line - helpline) volunteers and the film’s creative team will invite the audience to discuss the particularly relevant subject of emotional health.

Films that enrich the daily life

In the Film Caravan programme films, which have received critical recognition and most endearment by the audiences at the Vilnius International Film Festival “Kino Pavasaris” will be screened.

Presently the programme includes - the colourful animated film for the whole family Little Vampire, a story speaking of fragility of nature and its preservation Spread Your Wings, the best European comedy The Big Hit, and also The Painter and the Thief - a film reminiscent of a Scandinavian detective, as well as the audience favourite of the Vilnius International Film Festival which was nominated for an Oscar - Quo Vadis, Aida?, and a very visual, sensitive, French drama Gagarine.

The audiences will also be able to see the rebellious version of Jack London’s novel about freedom and culture Martin Eden, artistic drama filled with romance and finesse Portrait of a Lady on Fire, a film pulsing with desire for freedom and the iconic Viktor Tsoi’s music Summer,  Oscar recipient comedy-drama Another Round and many other favoured films from the Vilnius International Film Festival “Kino Pavasaris”.

Film Caravan is implemented with the funds of the EEA and Norway Grants. The project is supported by the Lithuanian Film Center. Project partners - the Reykjavik International Film and the Nordic Council of Ministers Office in Lithuania.