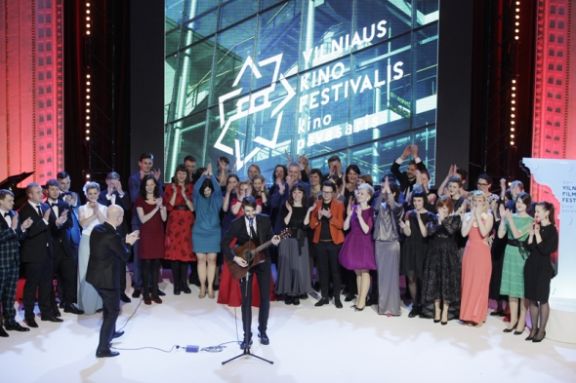 On Thursday evening, Vilnius IFF “Kino Pavasaris” invited guests to attend the celebratory closing ceremony of the festival at the Lithuanian National Philharmonic. For two weeks, movie theatres in five Lithuanian cities were full of cinema enthusiasts attending screenings of exceptional films, meeting with filmmakers from around the world, and going to many other events.

All of the competition programme winners were announced at the closing ceremony. Also named was the audience’s favourite film, with the award unsurprisingly going to Xavier Dolan’s “Mommy”, which opened the 20th “Kino Pavasaris” in Vilnius, Kaunas, Klaipėda, Šiauliai and Panevėžys. This year, more than 110 000 viewers attended the festival, setting a new record for “Kino Pavasaris”.

For a few weeks, Vilnius became the meeting place for recognised filmmakers and cinema industry professionals from around the world. More than 200 representatives of the culture and film industries visited the festival. Some of the most distinguished guests include Michel Hazanavicius, Leos Carax, Bille August, Joshua Oppenheimer, Aleksey Fedorchenko, and Antanas Mockus, who flew in from Columbia for the event.

Winners of the awards were announced

During the closing ceremony, the winners in each competition programme were announced. They were handed the festival’s statuette designed by Algirdas Kuzma, symbolising a baroque column alluding to the historical architecture in Vilnius. Kuzma, one of Lithuania’s most promising young sculptors, decorated the statuette with the logo of the 20th “Kino Pavasris” – a star.

The award for best film in this programme went to Ivan Ostrochovský’s drama “Koza”. The winner received a cash prize, established by the Vilnius City Municipality.

Myroslav Slaboshpytskiy was named best director for “The Tribe”. Margita Gosheva won the best actress award for her role in “The Lesson”, where she played a school teacher who robs a bank. The best actor title went to Márton Kristóf, who starred in “Afterlife”.

The best film, out of 11 included in this programme, was selected according to two important criteria: an original understanding of cinematic expression and an emphasis on one’s own identity. The award for best film in the “Baltic Gaze” programme went to “Victoria”. The jury named Joshua Oppenheimer as the best director for his documentary “The Look of Silence”. Bianca Kronlöf received the award for best actress for playing the leading role in “Underdog”, while Janusz Gajos won for best actor, having starred in the drama “Body”. The animated film “Rocks in My Pockets” received a special mention from the jury.

A few days ago, filmmakers were also awarded at the Lithuanian cinema industry event, which took place at the Palace of the Grand Dukes of Lithuania. The audience award for best Lithuanian film went to “Life is Sacred”, directed by Andreas Dalsgaard, Vivana Gomez and Nicolas Servide. “Timbuktu”, directed by Abderrahmane Sissako, received the film critic Saulius Macaitis award. The audience recognized Aistė Diržiūtė as the best Lithuanian actress for her role in Alantė Kavaitė’s “The Summer of Sangaile”. Marius Repšys was named the best Lithuanian actor. Director Linas Mikuta’s film “Fellow Travelers” received the award for best student film, and “Interrogator”, by Jurgis Matulevičius, was presented the special mention award.

Winners meet with the press

While the ceremony guests were watching short films selected by the organizers, the winners took part in a short press conference. Margita Gosheva, fresh off her best actress win in the “New Europe – New Names” competition, shared the origin of her film: “The director was inspired by a newspaper headline, this story actually happened in Bulgaria five years ago. When playing the part, I tried to be calm, patient and fair. I had seen an interview with this woman before I had even been invited to join the film’s creative team. I immediately agreed, even though I hadn’t read the script yet.”

Katarina Tomkova, film promoter at the Slovak Film Institute, represented “Koza”, which won the title of best film in the “New Europe – New Names” competition, as well as the CICAE award. “This film hasn’t yet premiered in my country. I am happy that the “Kino Pavasaris” audience had the opportunity to see it first,” said Tomkova.

Yana Novikova, from the film “The Tribe”, which was nominated in the same competition and won the best director award for Myroslav Slaboshpytskiy’s work, said: “The director didn’t know sign language. He had translators help him during the filming process. He only new the signs for two words: “thank you” and “work”.

An additional week of the festival

Viewers in Vilnius and Kaunas who didn’t get the chance to see their desired films or couldn’t make it to the festival are invited to additional screenings of the audience’s favourite films, on April 3rd – 9th.