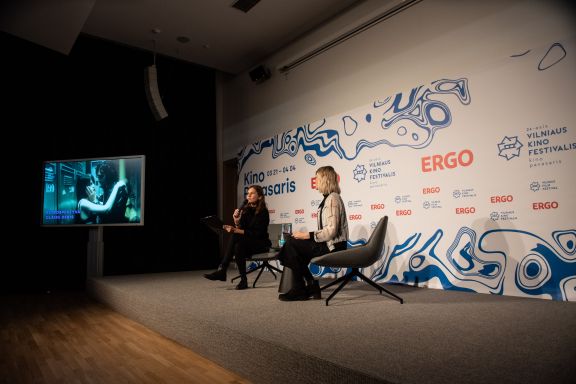 European Debut Competition Contenders, Retrospectives and More Have Been Announced

Starting March 21, the biggest film festival in Lithuania will offer fans of cinema all around the country exciting premieres, Claire Denis and Djibril Diop Mambéty retrospectives, a special screening in memory of Jonas Mekas, and more. The programme will include 170 films.

13 films have been selected for the European Debut Competition. It will include two contenders from Lithuanian directors – Marija Kavtaradzė’s “Summer Survivors”, which premiered at the Toronto Film Festival, and Aistė Žegulytė’s documentary “Animus Animalis (A Story About People, Animals and Things)”. Also competing for the title of Best European Debut at Vilnius IFF will be last year’s Golden Bear winner by Adina Pintilie “Touch Me Not”, Richard Billingham’s award-winning “Ray & Liz”, Cannes Critics’ Week winner “Diamantino” by Gabriel Abrantes and Daniel Schmidt, Best Animated Feature at the European Film Awards “Another Day of Life” by Raúl De La Fuente and Damian Nenow, and more debut features from Europe. Find the complete European Debut Competition programme here.

The Short Competition will screen 32 films, five of which come from Lithuanian directors, such as “Family Unit” by Titas Laucius, “When Children Come Home” by Kamilė Milašiūtė, “The Juggler” by Skirmanta Jakaitė, “Windows” by Akvilė Žilionytė, and “Caucasus” by Laurynas Bareiša. Find all Short Competition contenders here.

Vilnius IFF will host three more premieres of Lithuanian feature films. “Sasha Was Here” by Ernestas Jankauskas, which addresses the sensitive topic of adoption, will compete for the FIPRESCI Prize alongside other Scandinavian and Baltic films included in the festival programme. Documentary “Second Hand” by Artūras Jevdokimovas will reveal where thrift stores get their clothes. Finally, Rugilė Barzdžiukaitė’s documentary “Acid Forest” is set to close the festival with its stunning portrayal of Lithuania’s cormorant colony.

Nine films, including her autobiographical feature debut “Chocolat” (1988) and her most recent “High Life”, starring Robert Pattinson and Juliette Binoche, will be screened in the Claire Denis retrospective. The Djibril Diop Mambéty retrospective will include the only two feature films created by the innovative and daring Senegalese director: “Touki Bouki” (1973) and “Hyenas” (1992).

Both retrospectives, films shot on 35mm and experimental works will be screened in the new Screen 9, the unveiling of which will be attended by artist Jeremy Shaw. He will present his “Quantification Trilogy”, which recently premiered at Tate Modern in London.

The festival will also honour the recently departed Lithuanian-American avant-garde filmmaker Jonas Mekas with a special screening of his experimental documentary “As I Was Moving Ahead Occasionally I Saw Brief Glimpses of Beauty”.

The 24 th Vilnius International Film Festival “Kino Pavasaris” will take place March 21–April 4, 2019. Last year’s festival was visited by 116 551 filmgoers, becoming the largest cinema event in Lithuania and one of the most notable film festivals in Eastern Europe. For more information, visit www.kinopavasaris.lt

Head of Communication for “Kino Pavasaris”