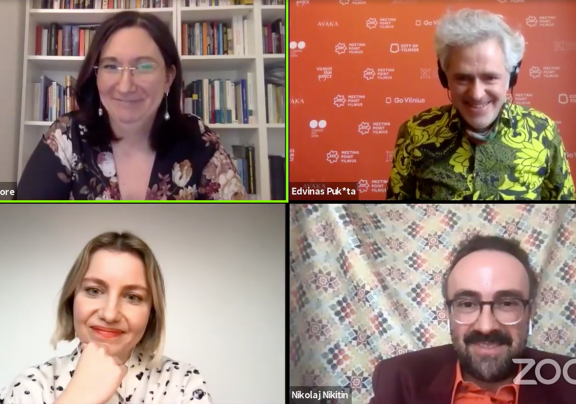 VILNIUS, April 19, 2021. E-Meeting Point—Vilnius, this year’s virtual edition of the leading Lithuanian film industry forum, concluded Friday, April 19 with the announcement of Talents Nest and Coming Soon award winners. The motto for the 2021 edition of this major audiovisual event was “Join us in Vilnius anytime, from any place, for ten days,” which was reflected in the approximately 320 audience members who connected to the program platform from 52 countries every day and night of the session.

As Head of Industry Alessandra Pastore comments, “Last year, we were the first industry event to be cancelled due to COVID. For this year, we wanted to turn the weaknesses that Covid is bringing us into opportunities: we enlarged the number of projects and countries represented, we invited higher number of professionals with a higher level exposure for the filmmakers. For the first time, people that usually were not able to come to Vilnius had the possibility to participate, to virtually explore the city and to discover new voices from Eastern Europe. This resulted in a larger audience of decision makers to create connections with.”

In the TALENTS NEST program, emerging professionals in all film disciplines from Baltic, ex-Soviet, and Caucasian countries participated in industry and networking opportunities with professionals in the field. This year’s Basic Pitching Forum Award was presented to Belarus’ Yanina Rashchynskaya, and the Torino Short Film Market award was presented to Russia’s Toma Selivanova and Estonia’s Bojana Babic.

The centerpiece program of Meeting Point—Vilnius is COMING SOON, a work in progress session dedicated to the development of 25 debut films, selected from applicants across Europe, who have the opportunity to pitch their projects, set individual meetings with industry professionals, and qualify for awards with cash prizes. This year’s winners include the Lithuanian Film Center Award winner A Hero of Our Time by Mirac Atabey, in which Lermontov’s infamous hero crosses paths with a contemporary Anatolian; the AVAKA - Best Lithuanian Pitch winner, Doviljė Šarutytė’s Feature Film about Life, a formally inventive family portrait with documentary elements; the Marché du Film Producers Network Award winner Aurora’s Sunrise, by Armenian director Inna Sahakyan and producers Vardan Havhannisyan and Justė Michailinaitė, presented by ARTBOX, Lithuania; a second Marché du Film Producers Network Award winner, the tragicomic A Dying Showgirl and Her Son in Space by the debut Sweidish team of director Charlotte Eliasson and producer Elin Bennett; and the Sunny Side of the Doc Award winner Aurora’s Sunrise, by Armenian director Inna Sahakyan.