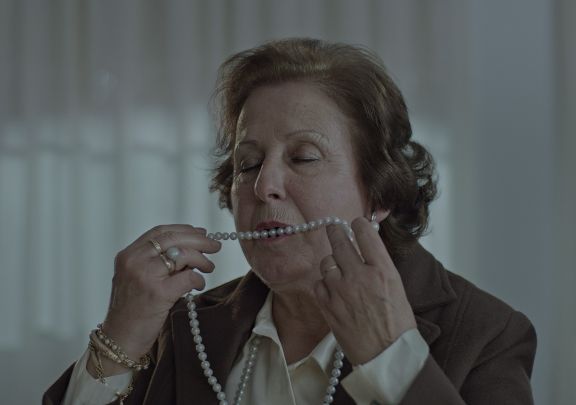 The 26th International Vilnius Film Festival “Kino Pavasaris” went digital for the second year in a row, with winners announced during a live broadcast. Ainhoa Rodríguez was named Best Director for her impressively distinct vision in “Destello Bravío”. This original debut with its surreal atmosphere, bright aesthetics and subtle soundtrack, invites us to rethink the scars caused by the patriarchal system in remote provinces.

The entire work feels like a collective dreamscape is cracking through the veneer of reality - where did the idea come from for the film? Was it inspired by an image that came to mind? An idea / concept?

It comes from my need to work with natural actresses. I had already directed non-actors in other works, and the raw material they offer me is absolutely fascinating, rich, vital. They are wonderful because no matter how surreal the scene is, they really will for real because when they play themselves they will always play a solid role. So I really wanted to work with them in a more creatively ambitious way, on a feature film. They have been absolutely generous and participate in the game that I propose to them in a wonderful leap of faith. Trust has to be mutual: one trusts the other, and when they agree to play my game, I, as a director, have a world ahead of me. And this game stimulates and amazes me and is what keeps me rolling.

The story feels deeply rooted in the cultural and geographical landscape of the film. Can you tell us more about the village where you filmed - and why there?

This film arises from several laboratories on cinema, woman, and non-normative views where I work with rural women in Badajoz (South West of Spain) with a regional institution's support. I went to live in a small rural town of about 600 inhabitants in Tierra de Barros (Badajoz) for about a year (filming included) to do the fieldwork and build the script because I wanted to be part of the town. That is the land of my paternal grandparents and my father, and therefore it was a return to my origins. It is also my land. And by working with non-actors, I am acquiring a clear and solid position defending a particular accent of the Spanish Southwest, some real faces, some non normative bodies. I reflect on a decaying Catholic culture before the arrival of capitalism. Defending the local, the genuine, the personal, the traditions are the way to break with the commercial cinema's hegemonic story. Making cinema is a political act.

It feels like DESTELLO BRAVIO is composed of portraits that belong to the characters.

Yes. The fundamental reason for choosing to work with non-actresses and non-actors is to filter everything through themselves, their personality, emotions, and experiences. Whether the experience is theirs or someone else's, they will make it theirs. And for this, you have to adjust the dress to measure until it is perfect to them, dedicating a lot of time, both in directed improvisations and as a text construction.

Opening of the film sets up a kind of ‘liberation’ we will soon see later in the film - distinctly feminine and one which figuratively and literally ‘removes’ the layers of inhibited patriarchy. Can you talk a bit about this?

The film is full of female characters in need of liberation who undertake small acts of transgression representing a big world. And, without being optimists, they do mark a path to hope. Although after each revealing act of bravery, they have to go back to the routine, to the weights of the system, to the woman's space that is a prison within a prison. The landscape is liberating and suffocating, like the scenes: the lake at the beginning is the drunkenness, the breaking of the rules, sending the wedding to hell: the "fucking" wedding! But it is also the swamp, an immense artificial hole full of water created by the man, but it is not the sea that does not take you to a dream place, because, on the other side, there is the same town where they feel trapped. It is ironic.

Sound design is incredible in the film - an otherworldly soundscape that seems to emanate from the ground and swallow through its resonance the entire world. Can you talk a bit about the role of sound and its construction?

The intention is that the sound gradually generates tension as if a distant volcano were about to erupt, which accompanies the tale's suspense. Sound design and musical composition go hand in hand, losing their limits. Like all this film in general, sound moves in a duality: documentary naturalism and the reinvention of reality. Thus, I wanted to work with real sounds from the countryside (direct sound). These sounds have to seem to be twisted by hand, creating strangeness in a mix between documentary in everyday life in the town and magical realism to speak of esotericism. Traditional songs and psychedelic music also reflect that duality.

Cinematography has a crisp, extremely detailed image that captures textures of aristocratic décor, galant fashion, but more importantly, the microscopic details of skin. It’s almost hyper-realistic and adds to the film’s subtle surreal atmosphere. Can you discuss your visual approach?

I wanted real faces and bodies to make the ordinary something special and extraordinary. The image also moves in that duality: documentary everyday life and aesthetic sublimation, highlighting the world to which the protagonists belong and where they are locked up. That may lead us to hyperrealism, as you say. The fixed sequence shots frame and trap the characters in their routine and enhance Tierra de Barros's characteristic spaces. Also, long sequence shots are an ideological position, inviting the viewer to participate in the film, search and build. The viewer must make an effort to move through the frame, through the staging, through the different terms. Thus he will get her reward. The cinema is not fast food that leaves no mark.

Religion exists as a structuring spiritual ritual for the community - yet the true spirituality seems to come from an otherworldly space. Can you talk about the ‘magical realist’ layer of the film and the role of dreams?

In the first place, I think there is my view that mediates, in a way, an agnostic view; despite coming from Catholic culture, I have not participated in worship, and I have not given it importance. And suddenly, in that town, that worship seems strange to me. I spent a lot of time with them and their veneration for the Catholic cult, for those dolls for faith, was curious and fascinating to me. But I also coexisted with their exoteric perception. The film addresses the end of a traditional way of life before the arrival of globalization: that tradition is Catholic... The mystery of what is to come and what will make them disappear is the bravo bravío destello (the mighty flash) which is the fear of death.

The theme for our festival this year is “To Act and / or to Be?” - which could be interpreted as an existential / philosophical proposition but also as a concrete, individual dilemma. How do you see DESTELLO BRAVIO fitting (or not) in this theme?

The interview was prepared by Andrei Tănăsescu, a programme curator of VIFF.